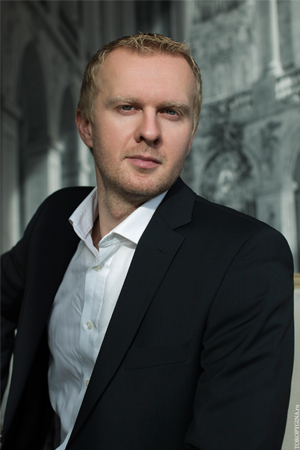 Pavel Petrenko was born in Leningrad in 1981. Graduated from the Glinka Choral School and the St Petersburg State Rimsky-Korsakov Conservatoire, having specialised in choral conducting and opera and symphony conducting.

From 2004-2006 he worked at the St Petersburg Chamber Opera Company, where he conducted performances of Rita, ou le mari battu, Il campanello di notte, The Falcon and Il matrimonio segreto. From 2007-2010 he was a guest conductor with the Zazerkalye children’s music theatre where he conducted performances of Die Zauberflöte, La Cenerentola and Die Fledermaus. Since 2008 he has been Artistic Director and Principal Conductor of the Vyborg Music Theatre and Studio where he has staged the operas I pagliacci, Iolanta and Kashchei the Immortal.
Since 2014 he has been a conductor of the St Petersburg State Symphony Orchestra and a guest conductor of the Yekaterinburg Philharmonic Youth Orchestra.

From 2003 until 2020 he worked as a chorus master at the Mariinsky Theatre, also appearing as a conductor of concert programmes and operas, including such premieres as Nikolai Karetnikov’s The Mystery of the Apostle Paul, Rodion Shchedrin’s Dead Souls and The Lefthander, Alexander Dargomyzhsky’s Rusalka, Gaetano Donizetti’s L’elisir d’amore, Modest Musorgsky’s Salammbô and The Marriage and Igor Stravinsky’s Mavra in addition to established repertoire including Sergei Prokofiev’s The Love for Three Oranges, Antonín Dvořák’s Rusalka, Nikolai Rimsky-Korsakov’s Christmas Eve and May Night, Jules Massenet’s Don Quichotte, Igor Stravinsky’s Les Noces, Hector Berlioz’ opera Benvenuto Cellini, Rodion Shchedrin’s The Little Humpbacked Horse and A Christmas Tale.
Information for October 2020