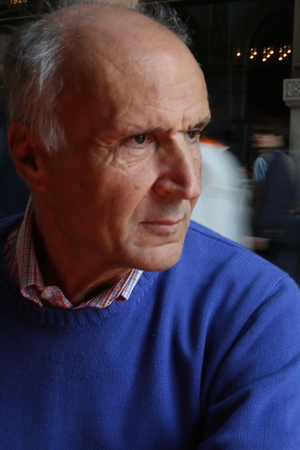 Oleg Caetani has performed at the world’s major venues such as La Scala in Milan, the Mariinsky Threatre in Saint Petersburg, the Royal Opera House in London, the Opera House in San Francisco, the Musikverein in Vienna, the Lincoln Center in New York, the Suntory Hall, the Sydney Opera House, Staatskapelle Dresden.

Caetani considers Nadia Boulanger to be the driving inspiration of his career. She discovered his talent, initiated him to music and gave him the philosophical approach to life. At the Rome Conservatory of Santa Cecilia he attended Franco Ferrara's conducting class and studied composition with Irma Ravinale.

After studying all the Shostakovich’s symphonies with Kirill Kondrashin at the Moscow State Conservatory, he graduated from the St. Petersburg Conservatory (class of Ilya Mussin). Winner of the RAI Turin competition and the Karajan Competition in Berlin, he started his career at the Berlin State Opera as a repetiteur and an assistant of Otmar Suitner.

Oleg Caetani was Conductor and Artistic Director of the Melbourne Symphony Orchestra from 2005-2009. Before that he had been Principal Conductor of the Staatskapelle Weimar, 1st Kapellmeister of the Frankfurt Opera and General Music Dirctor in Wiesbaden and in Chemnitz.

Since 1999 Caetani has had a particularly close relationship with La verdi Orchestra: with them he toured in South America (2003), Spain (2009) and performed three concerts in Salzburg in 2016. In April 2008, he conducted the Verdi Orchestra in a concert presented by the Italian President to Pope Benedetto XVI in the Vatican which was recorded live for Eurovision TV.

Shostakovich’s music has a central role in his repertoire. Caetani translated the libretto of The Nose from Russian into German for the production in Frankfurt in 1991 and conducted the Italian premiere of the operetta Moscow Cheriomushki in 2007. He also has and conducted many first performances of Shostakovich’s operas, concertos, ballets and suites in different countries as well as recorded the complete cycle of Shostakovich symphonies with the La Verdi Orchestra in Milan (for the first time in Italy). These CDs have won several prizes 10/10 from Classical Today in USA, ffff Télérama in France and Record Geijutsu in Japan.

Engagements for the 2018-2019 season include concerts with the Orchestre Philharmonique de Nice at the Opéra Nice Côte d’Azur and the London Philharmonic Orchestra at the Royal Festival Hall in London as well as Wayne McGregor’s ballet Woolf Works to music by Max Richter at La Scala.
Infromation for July 2019