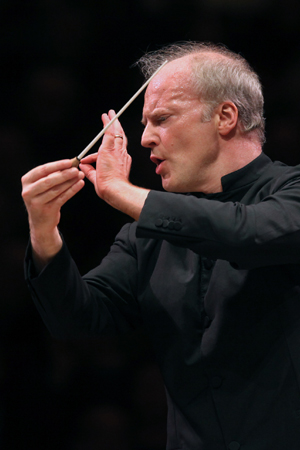 Gianandrea Noseda is widely recognized as one of the leading conductors of his generation. He was named the National Symphony Orchestra’s seventh music director in January 2016 and began his four-year term last September with the 2017–2018 season opening night gala celebrating Bernstein’s Centennial.

Noseda works with the leading opera houses and orchestras in the world, including the Cleveland Orchestra, La Scala, Munich Philharmonic, New York Philharmonic, NHK Symphony, Orchestra dell’Accademia Nazionale di Santa Cecilia, Philadelphia Orchestra, Royal Opera House, Wiener Symphoniker and Zurich Opera. He made his debut with the Berlin Philharmonic in 2015 and in the same year at Salzburg Festival leading the Vienna Philharmonic with performances of Il Trovatore and a gala celebrating Placido Domingo’s relationship with the Salzburg Festival.

Noseda also continues to work with institutions where he previously held posts, including the BBC Philharmonic, which he led from 2002–2011; the Pittsburgh Symphony, where the Victor de Sabata Chair was created for him as principal guest conductor; and the Mariinsky Theatre, which appointed him its first-ever foreign principal guest conductor in 1997, a position he held for a decade. He was Principal Guest Conductor of the Orchestra Sinfonica Nazionale della RAI from 2003 to 2006.

Gianandrea Noseda has a cherished relationship with the Metropolitan Opera dating back to 2002. In the 2016–2017 season he conducted a new production of Gounod’s Roméo et Juliette, which received its premiere at the New Year’s Eve Gala.

Noseda’s intense recording activity counts more than 50 CDs, many of which have been celebrated by critics and received awards. His Musica Italiana project, which he initiated more than ten years ago, has chronicled underappreciated Italian repertoire of the 20th century and brought to light many masterpieces. Conducting the Vienna Philharmonic Orchestra and the Orchestra Teatro Regio Torino he has also recorded opera albums with celebrated vocalists such as Ildebrando d’Arcangelo, Rolando Villazon, Anna Netrebko, and Diana Damrau. The critics have received both recordings with the LSO for the label LSO Live featuring the War Requiem by Britten and the Messa di Requiem by Verdi with huge acclaim.

A native of Milan, Maestro Noseda is Cavaliere Ufficiale al Merito della Repubblica Italiana, marking his contribution to the artistic life of Italy. In 2015, he was honored as Musical America’s Conductor of the Year, and was named the 2016 International Opera Awards Conductor of the Year. In December 2016 he was honored to conduct the Nobel Prize Concert in Stockholm. In February 2018, he was appointed “Accademico of Santa Cecilia”.
Information for June 2018