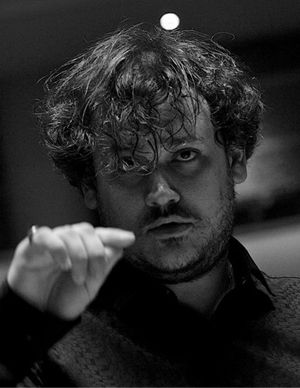 Anton Lubchenko is a graduate of the St Petersburg State Rimsky-Korsakov Conservatoire (class of Alexander Mnatsakanian).

In 2003 at the St Petersburg Conservatoire came the first performance of his Liturgy of St John Chrystosom. In 2004 the composer received a grant from the Governor of St Petersburg Valentina Matvienko for his Fourth String Quartet.

In 2006 on the initiative of Larisa Gergieva he wrote the opera The Son of Man in memory of the victims of the tragedy in Beslan. The same year, Kultura TV commissioned the documentary Man of April about the life and work of Anton Lubchenko. In 2009 he made his debut as a conductor at the Toronto Opera. The composer conducted his own ballet In Colours.

In June 2010 there was a performance of Lubchenko’s cantata Brest Fortress at the concert In Memory of the Guard at the Brest Fortress. The composer was also Artistic Director and Conductor of the concert.

In the 2010–2011 season Lubchenko led the State Academic Opera and Ballet Theatre of the Republic of Buryatia as Artistic Director and Principal Conductor. Since October 2010 he has been Director of the international music festival The Seasons. In 2011 at the Bolshoi Theatre of Russia there was a premiere of the one-act ballets Dzambuling and Souvenir de Bach. Since 2011 the musician has been a permanent jury member of the international Competizione dell’Opera in Linz. In 2012 at Smolny Cathedral in St Petersburg there came the premiere of his symphonic epos Orthodox Rus.

In 2012 Lubchenko created a new orchestral version of Prokofiev’s last opera The Story of a Real Man. Deferring to late examples of the composer’s work, he decoded “markers” of Prokofiev’s orchestration which the latter had left in the manuscript clavier score, as well as restoring the composer’s original text. In 2012 he conducted a suite of works in Nancy, while on 9 May 2015 at the Primorsky Opera and Ballet Theatre in Vladivostok came the premiere of his new version of the opera. In November 2015 the production was conducted by Anton Lubchenko at the Mariinsky Theatre.

In the 2014–2015 season he was commissioned by the Regensburg Opera to compose the opera Doctor Zhivago and supervised the production. The work caused a sensation in the Russian and international press.

From 2013–2015 Lubchenko was Artistic Director and Principal Conductor of the Primorsky Opera and Ballet Theatre.