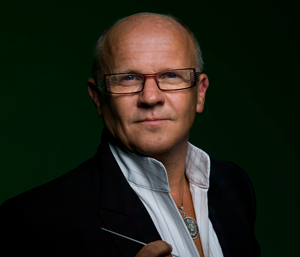 Christian Lindberg’s achievements on the trombone can only be compared with those of Paganini on the violin or of Liszt on the piano. Having premiered over three hundred works for the trombone (including more than thirty composed by himself), recorded more than seventy solo CDs and having an international solo competition created in his name in Valencia in Spain, Christian Lindberg is today nothing less than a living legend.
At an early stage of his career he joined Yo-Yo Ma and Gidon Kremer as the BBC Music Magazine’s soloist of the year. In 2000, together with Louis Armstrong and Miles Davis, he was voted by an international poll as one of the greatest brass players of the 20th century. He was the first Swedish instrumentalist ever to be invited to perform as a soloist with the Berliner Philharmoniker and the Chicago Symphony Orchestra. In 2007 he was artist in residence at the Musikverein in Vienna. Christian Lindberg has worked with practically every major orchestra and conductor in the world today. For a trombonist to achieve all this before turning fifty is remarkable to say the least.
Lindberg took up the trombone at the age of seventeen having been inspired by jazz trombonist Jack Teagarden. At the age of eighteen he gained admission to the Royal College of Music in Stockholm and, having played for only two years, he was given a position as trombonist in the orchestra of the Royal Swedish Opera in Stockholm. Aged twenty, he left the orchestra and has since built up a unique and impressive career as the first trombone soloist in history as well as embarking on two new enormously successful careers as a conductor and composer.
Today Lindberg’s schedule is fully booked for years in advance. This schedule combines being Principal Conductor of the Nordic Chamber Orchestra and the Swedish Wind Ensemble with guest conducting of orchestras such as the Rotterdam Philharmonic and the Orchestra di Milano Giuseppe Verdi, working on composition commissions from ensembles such as the Chicago Symphony Orchestra, the Australian Chamber Orchestra and the Swedish Radio Chorus and continuing his solo appearances with orchestras such as the London Philharmonic, the NDR Orchestra in Germany and Tokyo’s Yomiuri Orchestra. In addition to these activities, Christian Lindberg makes sure he can devote valuable leisure time to his family and his wife at their country residence on a peninsula of the beautiful Stockholm Archipelago.

Christian Lindberg’s career as a composer is remarkable. Already at the age of six he was composing music, but at the age of sixteen he decided to study harmony, counterpoint and composition seriously with Torsten Nilsson in Stockholm. Two years later, he wrote his first official composition, a brass quintet, but after the first rehearsal Christian was so shocked and disappointed that he withdrew the piece and resolved never to compose again.
This was roughly the same time that he fell in love with and began to study the trombone and, instead of composing, he began to orchestrate, arrange and edit music by other composers. He also decided that his main goal would be to inspire other composers to write for the trombone. Today he has arranged over one hundred works for trombone, and over eighty trombone concerti have been dedicated to him by composers such as Berio, Takemitsu and Xenakis. However, after eager persuasion from his friend, the composer Jan Sandström, he broke his promise not to compose. At the age of thirty-nine he accepted a commission from the Musica Vitae string orchestra. Sandström said “Whatever you do, do not try to prove anything. Just write whatever comes into your mind without judging it to be good or bad. Like when a five-year-old does a drawing.”
This first piece, Arabenne, was, to Lindberg’s immense surprise, a huge success with both the audience and the critics. Immediately after the first performance Christian was faced with two new commissions and an offer from BIS records to start an extensive recording project with him as a composer. Today Lindberg has recorded three portrait CDs of his own music on BIS and has received commissions from orchestras including the Chicago Symphony Orchestra, the Rotterdam Philharmonic Orchestra, the Orchestra di Milano Giuseppe Verdi and the Australian Chamber Orchestra to name but a few. His pieces Akbank Bunka, Helikon Wasp, The World of Montuagretta and Mandrake in the Corner have been particularly successful.
Chick’a’Bone Checkout, commissioned by the Chicago Symphony Orchestra, received three standing ovations in a row at the premiere, something that had not happened to a contemporary piece in fourteen years at Orchestra Hall in Chicago. The Chicago Sun Times, Chicago Tribune and New York Times gave Lindberg stunning reviews for this composition. Today Lindberg is booked up to 2011 with international commissions by orchestras such as Rotterdam Philharmonic, the Orchestra di Milano Giuseppe Verdi, Orchestra of St John Smith Square, the Scottish Chamber Orchestra, Royal Stockholm Philharmonic, the Australian Chamber Orchestra, the Arctic Philharmonic Orchestra, the Odense Symphony Orchestra, the Swedish Chamber Orchestra, the Bodø Sinfonietta, Share Music Sweden, the Swedish Wind Ensemble, the Nordic Woodwind Quintet, the Trondheim Soloists and the Frankfurt Biennale. His own philosophy regarding his work as a composer is simple: “I do not write in any style whatsoever! I purely listen to what my brain and soul are telling me, and what I hear I simply put down on paper. To say anything more about my work would be pretentious nonsense.”