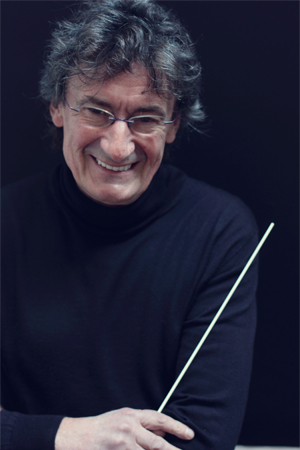 Jacek Kaspszyk studied conducting, music theory and composition at the Fryderyk Chopin University of Music, graduating in 1975, that same year making his conducting debut at Warsaw’s Teatr Wielki – Opera Narodowa. In 1976 he was appointed Principal Guest Conductor of the Deutsche Oper am Rhein in Düsseldorf. The following year he won the 3rd prize at the prestigious Herbert von Karajan Conducting Competition in Berlin. In 1978 he made his debut with the Berlin and New York Philharmonic Orchestras and was appointed Principal Conductor of the Polish National Radio Symphony Orchestra – two years later becoming its Music Director.

In 1982 he moved to London where he made his debut at the Royal Festival Hall with the Philharmonia Orchestra, after which he appeared regularly with the London Symphony Orchestra, the London Philharmonic, the Royal Philharmonic and the Royal Scottish National Orchestra. Since then, he has conducted many international orchestras including the Bayerische Rundfunk and the Orchestre National de France. From 1991-1995 he was Principal Conductor and Music Advisor of the Noord Nederlands Orkest.

In 1998 Jacek Kaspszyk was appointed Artistic and Music Director of the Teatr Wielki – Opera Narodowa, and two years later also became its Managing Director. Kaspszyk’s opera career has additionally included productions for many renowned opera houses, among them the Deutsche Oper am Rhein in Düsseldorf, the Opéra Comique in Paris, the Opéra de Lyon, English National Opera, the Teatro Colón in Buenos Aires. From 2006-2008 he worked regularly with the Lithuanian National Opera and Ballet in Vilnius, whose acclaimed productions of Strauss’ Salome and Wagner’s Die Walküre he also conducted at festivals in Ljubljana and Ravenna (2007) and during a well-received residency at the Israeli Opera Tel Aviv – Yafo (2008).

In 2006 he became Artistic Director of the Witold Lutosławski Philharmonic in Wrocław, and in 2009 was again appointed Music Director of the Polish National Radio Symphony Orchestra with which he toured throughout the UK that same year.

A recipient of many awards and honours, in 2011 he received the prestigious Elgar Society Medal for his interpretations of the composer’s music, joining such distinguished colleagues as Vladimir Ashkenazy, Andrew Litton and Leonard Slatkin.

Jacek Kaspszyk’s extensive discography includes his award-winning recording of Rossini’s Il signor Bruschino with the Polish Chamber Opera, the Edison Prize for his recording of Baird’s Concerto lugubre and several critically acclaimed CDs for Collins Classics with all four London orchestras, among them a recording of works by Johann Strauss II with the London Philharmonic Orchestra. His recording of Lutosławski's Symphonies No 2 and No 4 with the Wrocław Philharmonic received the Polish music industry’s Fryderyk Award, while his recordings with the Polish National Opera of Moniuszko’s The Haunted Manor for EMI was awarded a Platinum Disc and that of Szymanowski’s Król Roger for CD Accord was nominated in 2006 by BBC Music Magazine as “Record of the Year”.

In September 2013 Jacek Kaspszyk was appointed Music and Artistic Director of the Warsaw Philharmonic – the National Orchestra of Poland. He opened his tenure by conducting the Philharmonic’s ensembles in the final concert of the Chopin and His Europe festival, followed on 22nd September by an historic Warsaw Autumn festival concert with the pianist Krystian Zimerman, the latter being one of the highlights of the Year of Lutosławski. Jacek Kaspszyk also conducted the first three concerts in the history of the Philharmonic to be transmitted via the Internet.