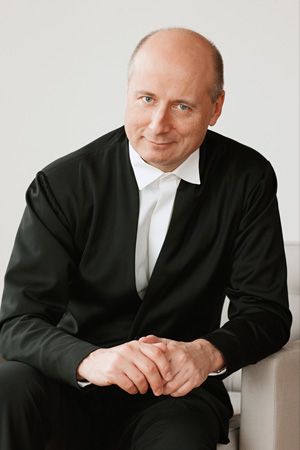 He was born in 1962 in Tallinn.
In January 2015 Music Director of the Orchestre de Paris Paavo Järvi conducted the opening concerts of the new Philharmonie de Paris, where the orchestra will be the main resident ensemble. Following their highly successful residency at Vienna’s Musikverein in May 2014, this season the musicians will continue to appear at major venues across Europe and Asia. This includes a return to China featuring performances in Beijing and the new Shanghai Symphony Hall. Recent recordings include an all-Poulenc CD (Patricia Petibon) a Stravinsky and Debussy disc on Deutsche Grammophon, Fauré’s Requiem (Matthias Goerne, Philippe Jaroussky) and an all-Chopin CD (Khatia Buniatishvili) on Sony. In 2013, Järvi was appointed Commandeur dans L’Ordre des Arts et des Lettres by the French Ministry of Culture for his contribution to music in France.

Artistic Director of the Deutsche Kammerphilharmonie Bremen since 2004, Paavo Järvi and the orchestra are following their recent Beethoven and Schumann focuses with an exploration of the music of Brahms, which will feature in a tour throughout Japan, South Korea, North America and Europe. Their complete Schumann Symphony recordings were enhanced by a DVD release, Schumann at Pier2, which has received numerous awards including the Gold Remi Award at the WorldFest-Houston International Film Festival (2013) and the Gold Panda award at the 2013 Sichuan TV Festival.

Järvi’s guest-conducting engagements include appearances with the Berliner Philharmoniker, the Staatskapelle Berlin and the Wiener Symphoniker. He will embarkup on a Nielsen symphony cycle with the Philharmonia Orchestra and conduct the prestigious 2015 New Year Concert with the Shanghai Symphony Orchestra and the opening concerts of the Prague Spring festival with the Czech Philharmonic Orchestra in May 2016.

Paavo Järvi has long supported Estonian composers including Arvo Pärt, Erkki-Sven Tüür, Lepo Sumera and Eduard Tubin. Currently Artistic Adviser of the Pärnu Festival and the Järvi Academy, he supports young talent through conducting master-classes. He is also Artistic Adviser of the Estonian National Symphony Orchestra and in 2004 won a Grammy award for his Sibelius Cantatas recording on Virgin Classics. He was named Estonian Public Broadcasting’s 2012 Musician of the Year. In January 2013, Järvi was awarded the Order of the White Star by the President of Estonia for his outstanding contribution to Estonian Culture.