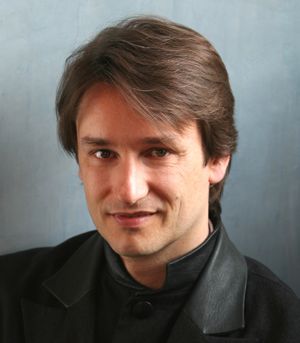 Born in Dresden. Studied the violin, trumpet, piano and choral conducting. Graduated from the Hochschule für Musik Carl Maria von Weber in Dresden having specialised in symphony conducting. Has taken part in conducting master-classes by such acclaimed conductors as Leonard Bernstein, Sergiu Celibidache, Ilya Musin and Valery Gergiev on several occasions. As an assistant he has worked with conductors including Valery Gergiev, Gianandrea Noseda, Peter Maag, Siegfried Kurz, Daniel Oren, Miltiades Caridis and Barry Wordsworth. Works with such singers as Anna Netrebko and Jonas Kaufmann.
From 1998 to 2002 he was Principal Conductor of the Stadttheater Klagenfurt (Austria). Since the start of the 2006 – 2007 season he has been Musical Director of the Yekaterinburg Opera and Ballet Theatre.

He is a frequent Guest Conductor at the Mariinsky Theatre, where he has participated in preparations for premieres of Richard Wagner’s tetralogy Der Ring des Nibelungen as well as conducting performances of Tristan und Isolde, Lohengrin, Falstaff, Parsifal, Le nozze di Figaro, Aida, Lucia di Lammermoor and Ariadne auf Naxos among others.
As a guest conductor he has collaborated with many renowned orchestras including the Semperoper in Dresden, the Deutsche Oper in Berlin, La Fenice in Venice and the San Carlo in Naples as well as conducting the Staatskapelle Dresden and appearing at the Opéra Bastille (Paris), the Gothenburg Opera and the Minnesota Opera.
Moreover, ensembles with which Michael Güttler has made recent debuts include the Israel Philharmonic Orchestra (April 2008), the Orchestre de Paris (May – June 2008), the Symphony Orchestra of the Moscow Philharmonic (March 2008) and the orchestras of the Washington National Opera (May 2009), the Deutsche Oper am Rhein in Dusseldorf (October 2009), the Hamburg Staatsoper (November 2009), the Théâtre des Champs Élysées (February 2010), the Teatro Real in Madrid (March 2010), the Teatro Nacional de São Carlos in Lisbon (April 2010), the New National Theatre in Tokyo (October 2010) and the Wiener Staatsoper (November 2010).