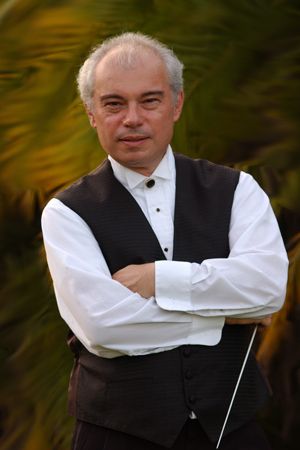 Igor Gruppman is one of those special artists whose career successfully spans a number of artistic fields. Critically acclaimed for his depth of interpretation and sensitive musicianship, Igor Gruppman enjoys an exciting and multi-faceted career as a conductor, violin soloist and orchestral leader with the Rotterdam Philharmonic Orchestra and as a frequent guest leader of orchestras such as the London Symphony, London’s Royal Philharmonic and St Martin-in-the-Fields. Gruppman has collaborated with and has been influenced by some of the most esteemed conductors of his generation including Solti, Gergiev, Rostropovich, Colin Davis, Rattle, Haitink and Yannick Nézet-Séguin.
Gruppman conducts orchestras on four continents. He made his debut with the Rotterdam Philharmonic Orchestra in the 2006-07 season, conducting a special Easter performance of The Last Seven Words of Christ by Haydn and Sieben Worte by Gubaidulina at the Rotterdam Cathedral. This programme was repeated at the Moscow Easter Festival where Gruppman shared the podium with maestro Gergiev. Most recently, Gruppman conducted the Rotterdam Philharmonic Orchestra in two critically acclaimed Mendelssohn programmes and an all-Mozart programme at De Doelen Great Hall in Rotterdam where, in addition to conducting the Rotterdam Philharmonic, he gave the Dutch premiere of Mozart’s recently reconstructed Concerto for Violin and Piano (Op. 315f) with pianist Ronald Brautigam. In the 2015-16 season Gruppman will combine performing chamber music with the great Emanuel Ax in the first half of a concert and conducting Beethoven’s First Symphony in the second.
Gruppman made his conducting debut with the Mariinsky Orchestra during the 2008 Easter Festival in St Petersburg, at the last moment standing in for Valery Gergiev who had fallen ill; he has appeared regularly with the orchestra ever since. In January 2010, Gruppman was honoured as the Mariinsky Theatre’s “Artist of the Month”. In the 2014-15 season, Gruppman will conduct a series of three programmes in St Petersburg.
In the 2014-15 season, Gruppman will also make his debut with the Orquesta Clásica Santa Cecilia in Madrid.
The spring of 2015 will mark the launch of a new orchestra,The Soloists of Europe, formed by Igor Gruppman and friends.
In the USA, in addition to guest appearances, Gruppman holds the post of Principal Conductor of the Orchestra at Temple Square in Salt Lake City. These concerts are now regularly broadcast on cable television in America and abroad. In recent seasons, some of the world’s greatest artists have appeared with this orchestra, among them Renée Fleming, Bryn Terfel and Ida Haendel.
In Asia, Igor Gruppman has appeared several times as a conductor and soloist with the Seoul Philharmonic.
As a soloist, Gruppman is critically acclaimed for his “rich and beautiful tone, elegant phrasing, drive, passion and virtuosity.” (The Strad magazine). He continues the proud traditions of his teachers, Leonid Kogan and Jascha Heifetz. Most recently, Gruppman received glowing reviews for his performances of the Double Concerto by Brahms under the baton of Valery Gergiev and the Second Violin Concerto by Prokofiev under the baton of Yannick Nézet-Séguin, both with the Rotterdam Philharmonic Orchestra.
The international press has given enthusiastic receptions to Gruppman’s violin solo recordings, among them Berlioz’ Rêverie et caprice (Naxos), Respighi’s Poema autunnale (Koch), Miklós Rózsa’s Sinfonia concertante and Violin Concerto (Koch), which marked the first release of the concerto since the recording by Heifetz for whom this piece was written. Arnold’s Concerto for Two Violins and Orchestra with the San Diego Chamber Orchestra received a Grammy award. Most recently, the long-anticipated reconstructed original string version of Brahms’ F Minor Quintet recorded with members of the Academy of St Martin-in-the-Fields was released on the Biddulph label.
Igor Gruppman is a graduate of the Moscow Conservatoire, where he studied with Leonid Kogan and Mstislav Rostropovich, followed by studies with Jascha Heifetz in Los Angeles; he is currently on the faculty of the Rotterdam Conservatoire. Igor and Vesna Gruppman co-founded the Gruppman International Violin Institute in 2002 to select, train and develop the careers of exceptionally gifted violinists around the world, employing the very latest videoconferencing technology.
Gruppman plays the 1731 “Jules Garcin” Stradivarius violin, generously provided by the Erasmus Foundation.