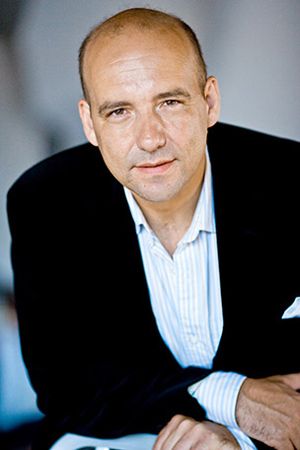 Emmanuel Villaume is a French-born conductor who has led captivating performances with the most prominent opera companies and symphony orchestras around the world. Born in Strasbourg in 1964, he studied music at the Conservatoire de Strasbourg. He continued his education at Khâgne and the Sorbonne in Paris, where he received degrees in literature, philosophy, and musicology. As author of noted articles of musicology, Villaume was appointed Dramaturg of the Opéra National du Rhin in Strasbourg at the age of 21. He holds an honorary doctorate from the University of Indianapolis. Currently he is the Music Director of The Dallas Opera.

Villaume leads three productions at the Winspear Opera House in the 2018–19 season, beginning in October with performances of both Wagner’s Der fliegende Holländer and Bizet’s Carmen. Following his critically acclaimed performances of Thaïs and David McVicar’s new production of Tosca last season at the Metropolitan Opera, Villaume returned to the Met in November for performances of Les pêcheurs de perles. He finishes his Dallas Opera season with Manon Lescaut in March, followed by his hotly anticipated European return at the Deutsche Oper Berlin conducting Massenet’s Don Quichotte.

Villaume continues his tenure this season as Music Director and Chief Conductor of the PKF – Prague Philharmonia, a position he has held since 2015. Recent projects with the PKF include a Deutsche Grammophon recording with Anna Netrebko, Warner Classics releases with soprano Angela Gheorghiu, pianist Andrew von Oeyen, and tenor Bryan Hymel, and a special New Year’s celebration concert at the Royal Opera House Muscat.

Emmanuel Villaume has led a distinguished career leading renowned symphonies in the U.S. and abroad. He made an outstanding contribution as Artistic Director and Chief Conductor of the National Slovenian Philharmonic, as well as with the Slovak Philharmonic Orchestra where he served as Chief Conductor in 2009–2016. In North America, he has conducted the Quebec Symphony, the Montreal Symphony, the Chicago Symphony, the Los Angeles Philharmonic. He also led the San Francisco Symphony, the Houston Symphony, and the Boston Symphony. His performances with music organizations abroad include: the Royal Philharmonic, Orchestre de Paris, Orchestre Philharmonique de Radio France, the Münchner Rundfunkorchester, Norwegian Radio Orchestra and the Prague Philharmonic Orchestra. In Australia, Villaume has conducted concerts with the Sydney, Melbourne and Brisbane orchestras, and in Asia he has appeared with the NHK Symphony Orchestra in Tokyo, the Tokyo Metropolitan Symphony Orchestra, and the China National Opera Orchestra for the 2008 Olympic Games.
Information for April 2019