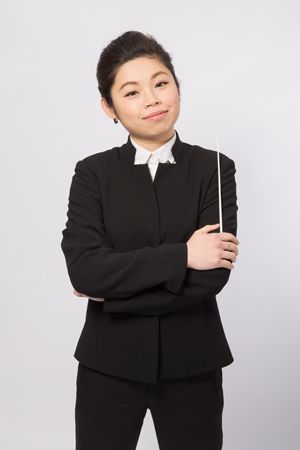 Born in Hong Kong, twenty-eight-year-old Elim Chan became the first female winner of the Donatella Flick LSO Conducting Competition in December 2014. As a result, she was appointed Assistant Conductor of the London Symphony Orchestra for 2015-16 and will conduct a number of their Discovery and education concerts this season.

Having recently taken part in a week of intensive master-classes with Bernard Haitink in Lucerne, Elim will return there in summer 2016 to make her debut with the Lucerne Festival Academy Orchestra. Other engagements include appearances with the Orchestre de Chambre de Lausanne, the Orchestre National de Lille, the Orchestra Haydn di Bolzano e Trento and the Hong Kong Philharmonic with which she made her debut in December 2015. Further ahead, she will also work with the Norrlands Opera, the Gävle Symphony, the Staatsorchester Rheinische Philharmonie and the Orchestra di Padova e del Veneto.

Elim’s highlights to date include her debut with the National Arts Centre Orchestra in Ottawa and the Orchestre de la Francophonie as part of the NAC Summer Music Institute in 2012 with Kenneth Kiesler and Pinchas Zukerman. In May 2015 she participated in the Musical Olympus festival in St Petersburg. Elim has led workshops with the Cabrillo Festival and Baltimore Symphony Orchestras, working alongside Marin Alsop, Gerard Schwarz and Gustav Meier, and has also worked with the Toledo Symphony Orchestra, the Youth Orchestra of Curanilahue and the Orchestra of the Universidad de Talca in Chile.