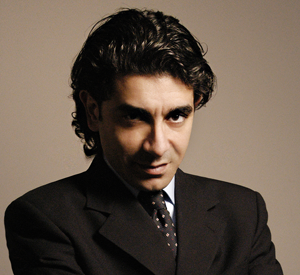 Born in Yerevan (Armenia), Karen Durgaryan has been Principal Conductor of the Armenian National State Opera and Ballet Theatre since 2001. He graduated from the Yerevan State Conservatoire in 1996 and studied under Professor Musin at the St Petersburg Conservatoire in 1997. In 1995 he was appointed an Associate Conductor of the Armenian State Philharmonic Orchestra and the following year was Music Director of the Britten and Armenia International Music Festival in Yerevan. Since 1997 he has been the Music Director and Conductor of the Yerevan State Chamber Music Theatre, overseeing productions of Britten’s Golden Vanity, Orff’s Die Bernauerin and Adjemian’s The Death of Kikos. In 1997 he performed to great public acclaim at the Aldeburgh Festival (Great Britain).
In the spring of 2008 Karen Durgaryan made his debut at the Mikhailovsky Theatre in St Petersburg, where he has conducted productions of Tchaikovsky’s Eugene Onegin, Donizetti’s L’elisir d’amore and a new production of Aram Khachaturian’s ballet Spartacus in addition to performances at the Bolshoi Theatre in Moscow and at the London Coliseum. Between October 2008 and February&nbs;2009 he conducted numerous performances and concerts with the Mikhailovsky Theatre in Italy (Teatro La Fenice, Venice) and in Japan.

Karen Durgaryan regularly conducts the Kazan State Opera and Ballet Theatre both in Kazan and on tour. This year he will conduct performances in Rotterdam (the Netherlands).
His international conducting activities have a special focus in Italy, where he has conducted at the Teatro Lirico in Cagliari, the Teatro Regio in Turin, the Teatro Carlo Felice in Genoa (with the renowned cellist Enrico Dindo as soloist) and a new production of Tchaikovsky’s Eugene Onegin at the Teatro Verdi in Sassari in addition to concerts with the Luigi Cherubini Orchestra (Artistic Director – Riccardo Muti) and the Toradze Piano Studio’s soloists, including its internationally acclaimed leader Alexander Toradze at the Ravenna Festival, as well as regular appearances with the Orchestra Sinfonica Siciliana in Palermo. In May 2012 he made his debut with the renowned Orchestra di Padova e del Veneto.

Since July 2010 Karen Durgaryan has collaborated with the Mariinsky Theatre in St Petersburg; he was invited by maestro Valery Gergiev to conduct a new production of Spartacus, which he still regularly conducts both in St Petersburg and on tour.
Since 2000 Karen Durgaryan has conducted major performances by Lebanese diva Fairuz, the greatest singer of Arab world, at numerous festivals and concert halls around the world. The CD Fairuz Live at the Beiteddine 2000 produced by Ziad Rahbani with EMI received tremendous international acclaim. In 2008 he also appeared with Ziad Rahbani accompanied by an international symphony orchestra and chorus in Syria for five concerts as part of the Arab Capital of Culture 2008 festival in Damascus.

In 2008 Karen Durgaryan was awarded the title of Honoured Artist of the Republic of Armenia and 2010 saw him receive Armenia’s most prestigious award for the arts and culture.