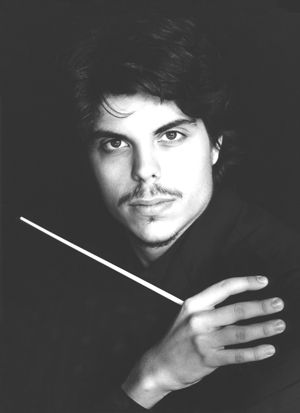 Born in Verona in 1987, Andrea Battistoni is a rising star on the international musical scene.

In January 2011 he was appointed Principal Guest Conductor at the Teatro Regio of Parma, with a three-year agreement for two operatic and two symphony productions every year.

He has appeared at various festivals including the Michelangeli Festival of Brescia and Bergamo, Verona Contemporanea, the Festival Giovane at the Rossini Opera Festival, the Valle d’Itria of Martina Franca, the Settimane Musicali di Stresa e del Lago Maggiore and the Verdi Festival in Parma. He has collaborated with such distinguished soloists as Ivo Pogorelić, Enrico Dindo, Sergej Krylov, Thomas Demenga and Mario Brunello.

Highlights for the 2016-2017 season include La traviata at the Bayerische Staatsoper and at the Münchner Opernfestspiele, Aida at the Deutsche Oper Berlin and at the Arena di Verona , Falstaff at the Opera di Genova as well as performance with the Tokyo Philharmonic Orchestra in Japan. Andrea Battistoni began his music studies at the age of seven with Petra and Zoltan Szabò, continuing then at the Conservatorio di Musica in Verona, graduating in cello in 2006 and attending master-classes with the cellist Michael Flaksman in Germany, graduating in 2009. He began to study conducting and composition in 2004, training with Ennio Nicotra in Perugia and Russia, Gabriele Ferro at the Fiesole Music School in Florence and Gianandrea Noseda at the Accademia Musicale di Stresa.

In June 2008 he made his orchestral debut at the Michelangeli International Music Festival in Bergamo with the Orchestra di Padova e del Veneto and in October 2008, thanks to Maurizio Barbacini to whom he was an assistant, he made his operatic debut with La Bohème at the Theater Basel.