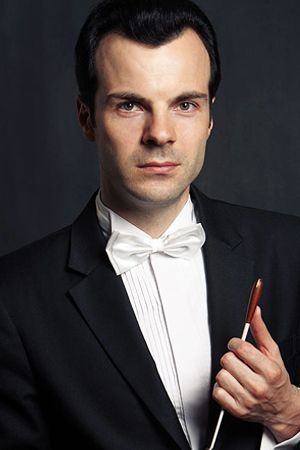 Andrei Danilov was born in St Petersburg. He studied conducting at the St Petersburg State Rimsky-Korsakov Conservatoire where his teachers were legends of the Russian conducting school Ilya Musin and Yuri Temirkanov. After winning the International Conducting Competition in Manchester, he accepted a position as a Junior Fellow in Conducting at the Royal Northern College of Music; from 2001-2002 he worked as a Young Conductor in Association with the Royal Northern Sinfonia (Newcastle, Great Britain). Has taken part in several international master-classes, conducted by Zubin Mehta, Mark Elder and Yuri Simonov.
In 2002 he began his collaboration with the St Petersburg Philharmonic Orchestra. He has appeared with a number of Moscow orchestras, among them the Russian State Svetlanov Orchestra and the New Russian Orchestra. In 2006 he made his very successful debut with the Russian National Philharmonic Orchestra (performing Mahler’s Second symphony), which laid the foundations for a long-standing relationship with this wonderful ensemble.
Since 2005 he has worked at the Novosibirsk Opera and Ballet Theatre. He has worked on new productions of Eugene Onegin, La traviata, Serenade (Tchaikovsky), Apollo and Pulcinella (Stravinsky) and La Bayadère (Minkus). He has an extensive opera and ballet repertoire that includes the Queen of Spades, Carmen, Tosca, Swan Lake and Cinderella among others. With the Novosibirsk Opera and Ballet Theatre he has toured to France, South Korea, China and Thailand.
In 2009 he was awarded the Golden Mask, Russia’s most prestigious theatre prize, as “Best Conductor”.
Since 2008 he has been a Guest Conductor at the Mikhailovsky Theatre (St Petersburg).
He is also the Principal Guest Conductor of the Samara Philharmonic Orchestra. In the spring of 2010 he was Assistant Conductor of a production of Bizet’s Carmen in Baden-Baden, Germany.
In December 2011-January 2012 he was Assistant Conductor of a production of Iolanta at the Teatro Real (Madrid), also conducting one performance.
Next season’s engagements include new collaboration with the Teatro Real (Madrid) and concerts in St Petersburg, Moscow and Timișoara (Romania).