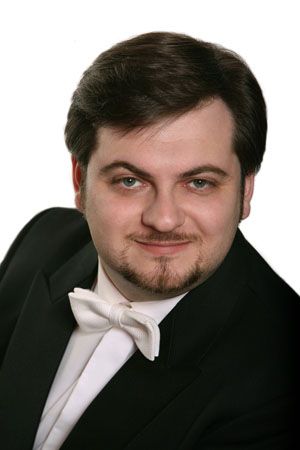 Alim Shakhmametyev graduated from the St Petersburg Conservatory choral conducting (1998) and opera and symphony conducting (2001) classes, where he studied with Fedor Kozlov and Ilya Musin.

He began his conducting career in 1994 and in 1996 made his debut at the St. Petersburg Philharmony. He collaborates with many orchestras in Russia, Europe and the USA, takes part in international festivals, holds seminars and masterclasses. His repertoire includes classical works as well as music by contemporary composers; he conducted Russian premieres of Vladislav Uspensky’s musical play Anna Karenina (2003), Boris Tishchenko’s vocal cycle The Run of Time (2003), John Corigliano’s Second Symphony (2008), Sergei Slonimsky’s viola concerto Tragicomedy (2005) and Symphony No. 31  (2013) as well as other works. Boris Tishchenko dedicated his Eighth Symphony (2008) to Alim Shakh, who was the first to perform it.

In 2002 he led the concerts by the international orchestra Let’s Make Music for the first time in Russia, and in 2005 became one of the co-authors of the project Cinemaphony (together with Georgy Paradzhanov, Tonino Guerra, Theo Angelopoulos, Rudolf Barshai, Boris Tishchenko, Andrei Petrov) combining Shostakovich’s Leningrad Symphony with archive footage. Over the years he collaborated as conductor with Luciano Pavarotti, Plácido Domingo, Mstislav Rostropovich, Maxim Shostakovich, Boris Berezovsky, Richard Galliano and other musicians. Participant and music director of events organized by the Ministry of Culture of Russia as part of Russian culture days in European and Latin American cities (2013–2018).

Since 2008 he has been chief conductor of the Novosibirsk Philharmonic Chamber Orchestra, performing in Russia and abroad.