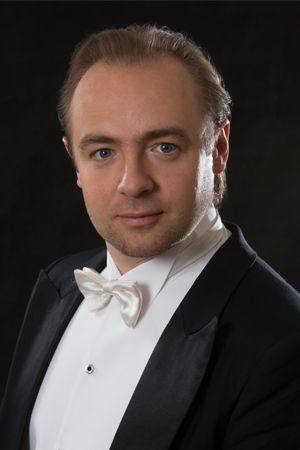 Alexey Bogorad is a staff conductor at the Bolshoi Theatre in Moscow, a position he has held since 2011. His 2011 triumph at the Lovro von Matačić International Conducting Competition in Zagreb pushed him to the front ranks of today’s generation of European conducting talent.

Born in a family of musicians, maestro Bogorad started studying music at the age of three. After completing Moscow’s prestigious Central School of Music he first studied clarinet and then studied conducting with maestro Gennady Rozhdestvensky at the Moscow State Conservatoire. In 2009 he completed his conducting studies with honours, including master-classes with Michail Jurowski and Colin Metters.

In 2010 Bogorad was awarded a fellowship by the American Academy of Conducting to study and perform at the Aspen Music Festival under Music Director Robert Spano. In the same year, he won 2nd prize and special recognition from the Ukraine National Symphony at the Stefan Turchak International Conducting Competition in Kiev. Also in 2010, he was selected by maestro Vladimir Jurowski to be assistant conductor of the Svetlanov State Symphony Orchestra.

An experienced solo clarinettist and chamber musician, Bogorad was a leader of the Bolshoi Theatre Orchestra from 1997 to 2011. He was also a soloist of Mikhail Pletnev’s Russian National Orchestra from 2001 to 2012.

Acclaimed for his mastery in conducting opera and ballet repertoire, maestro Bogorad supervises a wide range of programmes at the Bolshoi. His work in opera includes Ruslan and Lyudmila, Eugene Onegin, The Queen of Spades, The Fiery Angel, Don Giovanni, Der Fliegende Holländer, Madama Butterfly, Tosca, La Bohème, L’Enfant et les sortilèges and Wozzeck. Of the ballet repertoire, he has conducted Giselle, Swan Lake, The Sleeping Beauty, The Nutcracker, Raymonda, Cinderella, Don Quixote, La Bayadère, Jewels, La Sylphide and Marco Spada, which – among other Bolshoi productions led by Bogorad – was widely broadcast by Bel Air Classiques. He has worked with such stage artists as Svetlana Zakharova, Albina Shagimuratova and Natalia Gutman.

Regularly invited to conduct the Svetlanov State Symphony Orchestra, Bogorad has mastered an extensive symphonic repertoire. With Moscow’s Tchaikovsky Symphony Orchestra he has recorded a double CD of classical ballet music for the Columbia Records label.

Maestro Bogorad performs as a guest conductor with various Russian opera companies and symphony orchestras including the Russian National Orchestra and the St Petersburg Academic Symphony Orchestra. In 2013 he substituted for Valery Gergiev, conducting the Mariinsky Orchestra during the G20 Summit in St Petersburg. In 2015 he was honoured with an invitation to conduct the piano finals of the XV Tchaikovsky International Competition in Moscow, live-streamed by Medici TV with more than ten million viewers worldwide.

Internationally, Bogorad has made debuts with the Arctic Philharmonic Orchestra, the Oita Symphony, the Teatro di San Carlo, the Craiova Opera House and the Prague National Theatre.