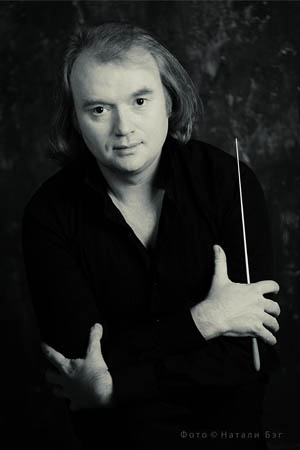 Alexander Vikulov studied violin at the Specialised Middle School of the St Petersburg State Rimsky-Korsakov Conservatoire and then went on to study at the Conservatoire itself. As a student, Vikulov joined the St Petersburg Orchestra of the State Hermitage Museum Camerata, founded by Saulius Sondeckis. After graduating from the Conservatoire, he continued to study conducting at the Mozarteum University Salzburg and then honed his skills under Yuri Simonov in Moscow and Budapest. In 2002, Vikulov made his debut at the Mariinsky Theatre with Le nozze di Figaro. In the following years, he has appeared at the Wiener Staatsoper, the Teatro Regio di Torino, and the Seoul Arts Centre.

Vikulov has been Music Director and Conductor of the dance company Ballet Manila (the Philippines) for many years. He gives concerts and holds workshops and master-classes both in Russia and abroad. Principal Guest Conductor of the St Petersburg State Symphony Orchestra Classica.
Information for March 2019