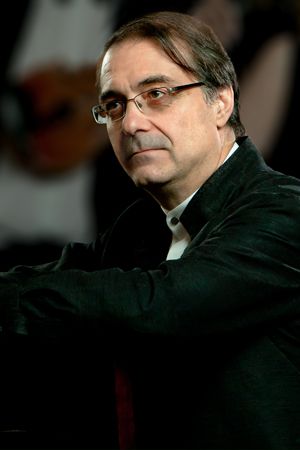 People’s Artist of Russia, recipient of the State Prize of Russia

Alexander Rudin is an internationally acclaimed cellist, conductor, pianist, harpsichordist, professor at the Moscow Conservatoire, researcher of early scores, author of orchestral versions of chamber works and the mastermind behind unique themed series. The musician’s repertoire includes cello music from four centuries  – both pieces that are exceedingly well-known and others that have never been performed before. Thanks to Rudin’s attention to forgotten episodes in the history of music, music-lovers throughout the world have heard many new works for the first time. These include Mikhail Vielgorsky’s Theme and Variations for cello and orchestra, cello concerti by Antonín Kraft, Jean Balthazar Trickler, Johann Heinrich Facius and Robert Volkmann, Dvořák’s First Cello Concerto and original versions of works for cello and orchestra by Tchaikovsky  – Variations on a Rococo Theme and Pezzo capriccioso. Much of Rudin’s repertoire features works by contemporary composers including Valentin Silvestrov, Vyacheslav Artyomov, Edison Denisov and Andrei Golovin.
Having received a traditional academic education, Alexander Rudin became interested in the authentic performance of early music, and in time came to a natural synthesis of moth movements. He currently combines performances on a modern cello and a viola da gamba and he performs both music by the Romantic composers and works from the baroque era and early classicism. Rudin’s activities as a pianist and conductor are developing in much a similar manner.
Since 1988 the musician has been Artistic Director and Principal Conductor of the Musica Viva Moscow chamber orchestra. Together with the ensemble, in Moscow he has presented unique concert programmes, many of which have been held during the subscription series Masterpieces and Premieres and Musical Gatherings at the Tretyakovs’ House, subscription series at the Moscow International House of Music and the Russian Gnessin Academy of Music and the Dedication festival.
The conductor has earned a reputation as a brilliant interpreter of opera scores and major works in the cantata and oratorio genre. In Moscow, he has conducted the Russian premieres of the oratorio Juditha triumphans by Vivaldi and an original version of Degtyarev’s oratorio Minin and Pozharsky, or the Liberation of Moscow. There have been performances of Haydn’s oratorios The Creation and The Seasons, Mendelssohn’s Symphony No 2 (Hymn of Praise) and concert versions of the operas Idomeneo by Mozart and Oberon by Weber.
As a guest conductor, Alexander Rudin appears with numerous acclaimed orchestras including the Academic Symphony Orchestra of the St Petersburg Philharmonic (Honoured Ensemble of Russia), the Russian National Orchestra, the Tchaikovsky Symphony Orchestra, the State Academic Svetlanov Symphony Orchestra of Russia and symphony and chamber orchestras in Norway, Finland and Turkey.
Alexander Rudin frequently appears on tour. As a soloist and conductor he has taken part in the international festivals Les Pianos folies (France) and La Follе Journée (France, Spain, Japan) among others. Rudin performs recitals in such countries as Germany, Finland, The Netherlands, Canada, Great Britain, Hungary, Slovenia and Turkey.
The musician’s activities as a teacher are linked with the Moscow Conservatoire (where he teaches a chamber ensemble class) and one of Turkey’s most prestigious higher education institutions  – Yaşar University in Izmir. The performer gives master-classes around the world and collaborates with Youth Orchestras as a conductor.
Alexander Rudin’s discography includes over thirty discs released on leading Russian and international labels (Naxos, Olympia, Tudor, Melodiya, Cello Classics, Russian Season, Russian Disc, RCD). Particularly well received were his recordings of six suites by Bach (Naxos), cello concerti by Trickler, Myaskovsky’s Cello Concerto, a Grieg Album, works by Alexander Alyabiev and Alexander Cherepnin as well as a live recording of a concert from the Great Hall of the Conservatoire (Beethoven’s Third Symphony and Kraft’s (Cello Concerto).
In 1983 Alexander Rudin graduated from the State Gnessin Musical Education Institute (cello class of Lev Yevgrafov and piano class of Yuri Ponizovkin). In 1989 he completed his studies at the Moscow State Conservatoire (conducting class of Dmitri Kitaenko). While still a student he was a prize-winner at the prestigious Bach Competition in Leipzig (1976), the Cassado Competition in Florence (1979) and the Tchaikovsky Competition in Moscow (1978, 1982).
Alexander Rudin is a People’s Artist of Russia, a recipient of the State Prize of Russia and a recipient of the City of Moscow Government Prize.