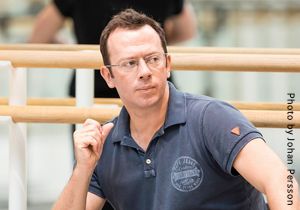 From 2004-2009 he was Artistic Director of the Bolshoi Theatre ballet company (Moscow).

Productions staged for the Bolshoi Theatre include The Bright Stream, The Bolt, Le Corsaire after Marius Petipa (together with Yuri Burlaka), Flames of Paris after motifs of the choreography of Vasily Vainonen, Jeu de cartes, Capriccio, Lost Illusions, Giselle after Jean Coralli, Jules Perrot, Marius Petipa. For the Territory festival he staged the ballet Old Lady Falling Down with Bolshoi Theatre dancers.

Since 2009 he has been Artist in Residence with the American Ballet Theatre, where he has staged the ballets Shostakovich Trilogy (set to Symphony No 9, Chamber Symphony and Piano Concerto No 1), Dumbarton, Seven Sonatas, On the Dnieper, The Sleeping Beauty after Marius Petipa, The Tempest, Songs of Bukovina, Harlequinade after Marius Petipa, The Seasons and Of Love and Rage.

He has collaborated with numerous stars of the ballet world. For Mikhail Baryshnikov he staged Valse-Fantasie, for Nina Ananiashvili he staged the ballets Charms of Mannerism, Dreams of Japan, Leah, and Bizet Variations, for Diana Vishneva he staged Pierrot Lunaire, for Wendy Whelan he staged Fandango, and for Natalia Osipova and David Hallberg he staged Valse Triste.

Knight of the Order of the Danish Flag. Honoured Artist of Ukraine.
Information valid for November 2020