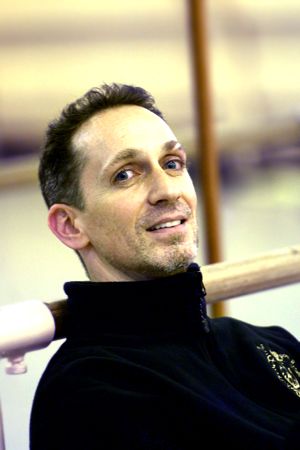 Noah D. Gelber was born in New York City and began his dance and singing training there at the age of five. He attended the High School of Performing Arts and the Professional Children’s School. He studied for eleven years at the School of American Ballet, often performing with the New York City Ballet. At the age of sixteen Noah became a principal guest-artist with the American Ballet Theatre, dancing numerous lead roles from the Balanchine repertoire. He performed in a New York production of West Side Story before leaving the USA to pursue his career in Europe.

Noah earned widespread critical acclaim for his speed, dynamism and technical precision, as well as his ability to excel in the classical ballet repertoire and inspire contemporary choreographers. He was a soloist with the Royal Ballet of Flanders (Antwerp, Belgium) for three years, later touring the USA and Mexico as a principal guest-artist before William Forsythe invited him to join the Ballett Frankfurt.

Over eight seasons of dancing with William Forsythe, he performed the lion’s share of the Ballett Frankfurt’s repertoire, notably premiering in the original cast of The Vertiginous Thrill of Exactitude. Noah has been invited as a principal guest-artist to dance in various international galas, performing Forsythe solos created especially for him. He was featured by designer Issey Miyake in Paris fashion shows and has featured in photography exhibitions at museums and theatres throughout Europe. Well versed in the complex improvisation techniques Forsythe utilises, Noah was chosen to demonstrate examples of these for the William Forsythe Improvisation Technologies CD-ROM. He is regularly invited to conduct workshops teaching these improvisation modalities at international institutions. In addition to his virtuoso dance skills, Forsythe spotlighted Noah’s vocal talents as a featured singer in his productions. As a solo pop-singer, Noah has appeared on television and sung in live concerts in Germany and Austria. His songs have been released on two CDs for the European market. Noah was active in the choreographic process at the Ballett Frankfurt, creating considerable solo and pas de deux material contained in several works by Forsythe. His most recent choreographic premieres were two large-scale productions for the Mariinsky Ballet.

His very first story ballet, “The Overcoat” after Gogol (2006), won St Petersburg’s Golden Sofit award as “Best Ballet of the Year” and a  Golden Mask, Russia’s most prestigious theatre prize. Other creations include The Golden Age for the Mariinsky Ballet, Object Ours for dancers of the Royal Ballet, the duet Running Time and his own solos Gnos Naos and Opus 3/1-3. These choreographic works have been presented in Moscow, St Petersburg, New York, London, Montreal, Tel Aviv and Frankfurt. Noah has also choreographed for the TV show Born to Dance in Israel.