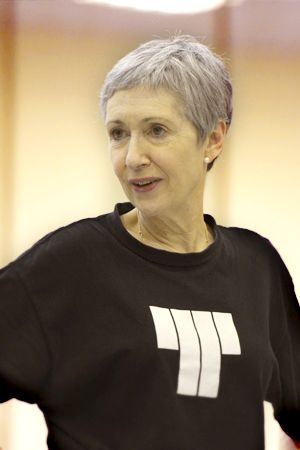 Kathryn Bennetts was born in Sydney (Australia). She trained at the Scully-Borovansky School of Ballet. At the age of fifteen she was invited to attend the Australian Ballet School in Melbourne, where she undertook a three-year intensive course in classical, contemporary and character dance in addition to studying the history of music, art and ballet. After graduating, she worked with the Australian Ballet.

Three years later Kathryn Bennetts left the company, having concluded a contract with the Stuttgarter Ballett where she was soon promoted to the rank of soloist. Over the course of nine years she worked with such choreographers as Kenneth MacMillan, Glen Tetley, Hans van Manen, John Neumeier, Maurice Béjart and William Forsythe. Kathryn Bennetts performed numerous lead roles. She has danced with Richard Cragun, Egon Madsen, Reid Anderson, Christopher Boatwright, Natalia Makarova, Gelsey Kirkland and Fernando Bujones. Together with Marcia Haydée she danced in John Cranko’s ballet The Taming of the Shrew. Kathryn Bennetts completed a two-year teaching practice course under Stuttgarter Ballett choreographer Alexander Ursuliak and began to teach at the John Cranko Schule in Stuttgart. She was soon offered the post as senior teacher in Turin and, at the same time, the post of choreographer at the Arizona Dance Theatre in Tucson (USA). As a senior teacher she subsequently worked at the National Ballet School of Canada in Toronto. Throughout this period she was a guest teacher with numerous ballet companies and schools throughout the world, among them the Stuttgarter Ballett, the Australian Ballet and the Australian Ballet School, the Finnish National Ballet, the Nederlands Dans Theater, the Royal Conservatory of The Hague, the Barcelona Conservatorio, the Zürcher Ballett, the Wiener Staatsballett, the Danish Royal Ballet, the Royal Winnipeg Ballet, the Houston Ballet, the ballet company of the Teatro alla Scala and Ballett Frankfurt.

In 1989 William Forsythe invited Kathryn Bennetts to join his company as a coach. She accepted his invitation and took over responsibility for day-to-day administrative work, teaching in class and organising rehearsals. In Forsythe’s absence, she would act as his deputy in Frankfurt as well as on tours. Together with Ballett Frankfurt she has been actively involved in tours to the USA, Europe and Japan.

As an assistant choreographer she has staged William Forsythe’s ballets for numerous internationally acclaimed companies including the Opéra de Paris, the Dutch National Ballet, Nacho Duato’s company, the Berliner Staatsballett, the National Ballet of Canada, the Stuttgarter Ballett, the ballet company of the Teatro alla Scala, New York City Ballet and the Boston Ballet.