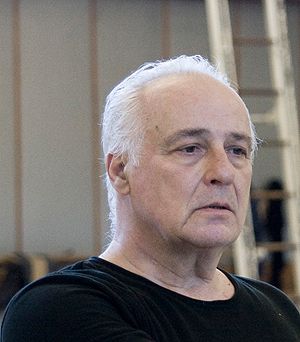 Patrice Bart is a French choreographer and is ballet-master and member of the Board of Ballet at the Opéra National de Paris; he has been connected with this theatre for over fifty years now. This is where his career began and this is where he won international acclaim.

Patrice Bart was born in Paris. He was twelve years old when he took his first steps and joined the École de Danse of the Opéra National de Paris, and just two years later he joined the theatre’s corps de ballet. He was then not yet fifteen, and so he had to obtain special permission to work. In 1963 Patrice Bart was made a coryphée and won the René Blum Prize for talented young French dancers for his achievements. As a first soloist of the Opéra de Paris, in 1969 he was a prize-winner at the I International Ballet Competition in Moscow, where he performed with Francesca Zumbo.

In 1972 Patrice Bart was awarded the honorary French title of “danseur étoile”, while in 1974 he won the Prix Nijinski, which is presented by Paris’ Université de la Danse.

Patrice Bart’s career as a dancer came to an end in 1986, but for a few more years he appeared on stage in character roles. At this time he also started coaching with the company’s younger performers, and in 1987 became its ballet-master.

In 1993 Patrice Bart made his debut as a choreographer at the Berliner Staatsoper with a new production of the ballet Don Quixote, and in 1995 he staged this work with the Finnish National Ballet. In 1996 Patrice Bart staged productions of Giselle at the Teatro alla Scala in Milan and Coppélia at the Opéra National de Paris. In 1997 the choreographer created a new version of Swan Lake at the Berliner Staatsoper and prepared La Bayadère for the Staatsballett in Munich.

In 1999 Patrice Bart staged a production of Verdiana, his own first original ballet to music from operas by Giuseppe Verdi, and he also staged The Nutcracker with the Staatsballett Berlin. In 2001 Patrice Bart set the ballet Verdiana for the Teatro Comunale in Florence. In 2002 at the Staatsballett Berlin the choreographer staged a production of his own version of Prokofiev’s Romeo and Juliet, while in 2003 he presented yet another new ballet at the Opéra de Paris – La Petite danseuse de Degas to new music by Denis Levaillant. His next ballet was to be Tchaikovsky, staged in 2005 for the Finnish National Ballet in Helsinki, while in 2008 the Swedish Royal Ballet invited Bart to stage the grandiose historic production Gustav III to music by Carl Maria von Weber and Joseph Martin Kraus.

Before accepting Waldemar Dombrowski’s invitation to stage his new ballet Chopin, the Romantic Artist in Warsaw for the Polish National Ballet, Patrice Bart returned to Berlin, where in 2009 he staged the ballet Das Flammende Herz to music by Felix Mendelssohn-Bartholdy about the English romantic poet Percy Shelley.